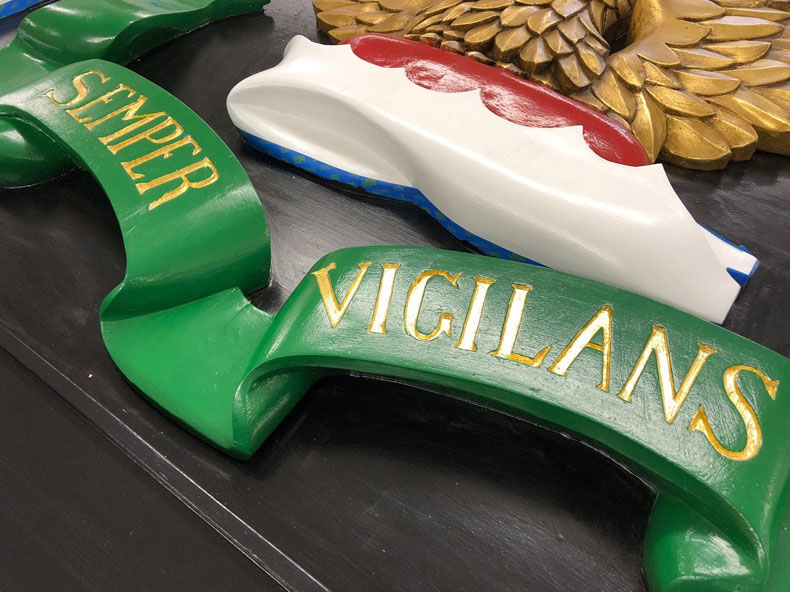 The historic and iconic Pantiles Phoenix Crest has been lovingly restored and re-installed in its former position above 39 The Pantiles in Tunbridge Wells.

This is in advance of new tenant Poggenpohl opening its doors to customers this autumn.

The restoration of The Pantiles crest was funded by Targetfollow, who has owned The Upper Pantiles for over ten years. Throughout this period Targetfollow has invested over £1,000,000 in a rolling programme of refurbishment and restoration of this historic and iconic location.

Paul Burnett, Associate Director at Targetfollow says: “The refurbished crest looks fantastic. The long-established Pantiles based craftsman Joseph McCarthy, commissioned by Targetfollow, has invested many hours painstakingly refurbishing the crest and has done an excellent job. The delicate installation was carried out by building contractor RDF Maintenance Limited. Through our collaboration we have restored another part of The Pantiles history which will be enjoyed by all who live, shop and visit for many years”.

The sign is likely to date back to the mid-1800s (specifically, between 1840 and 1860) and is the crest of the Phoenix Assurance Company. The crest was originally erected by William Hughes the grocer, who took over the building between 1880 and 1886.

Despite the crest being that of the Phoenix Assurance Company, due to its size and flamboyance, it has been concluded that it isn’t a fire mark and there is no evidence that Phoenix Assurance ever had an office onsite.

However, the company did have two offices elsewhere in Tunbridge Wells in the mid-1860s. A plausible scenario, therefore, is that William Hughes acquired the sign second-hand after Phoenix Assurance moved out of Tunbridge Wells.

Probably because he thought it would look impressive on the front of his shop! To offer some rationale for its presence on the façade, he added the putative date of the original building of the Gloucester Tavern (1706).

The sign was originally refurbished and reinstalled as part of the last restoration of the building, which took place circa 1990. 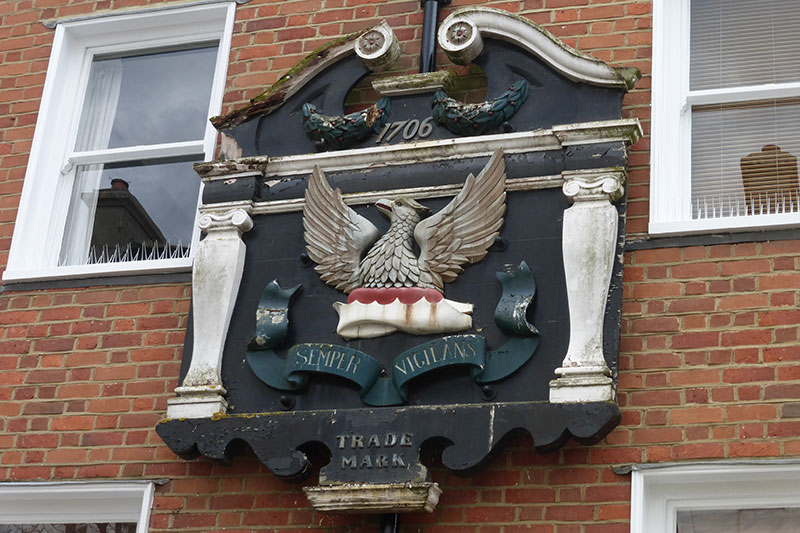 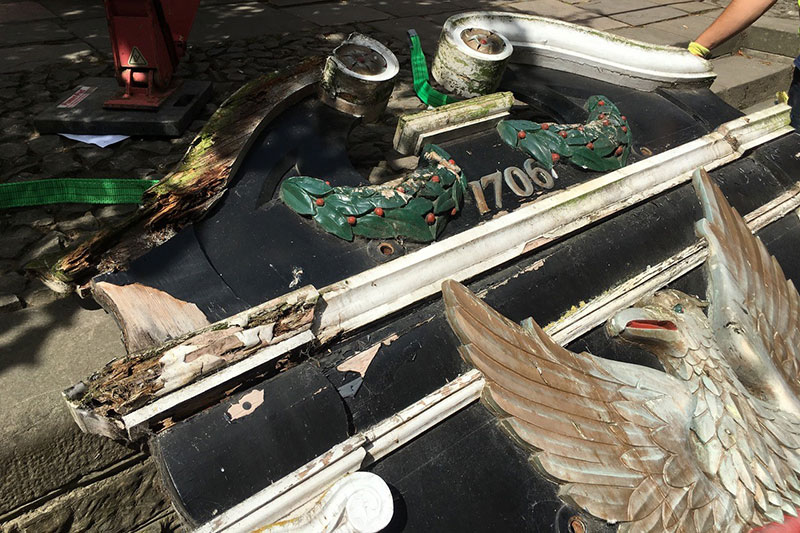 During and after restoration 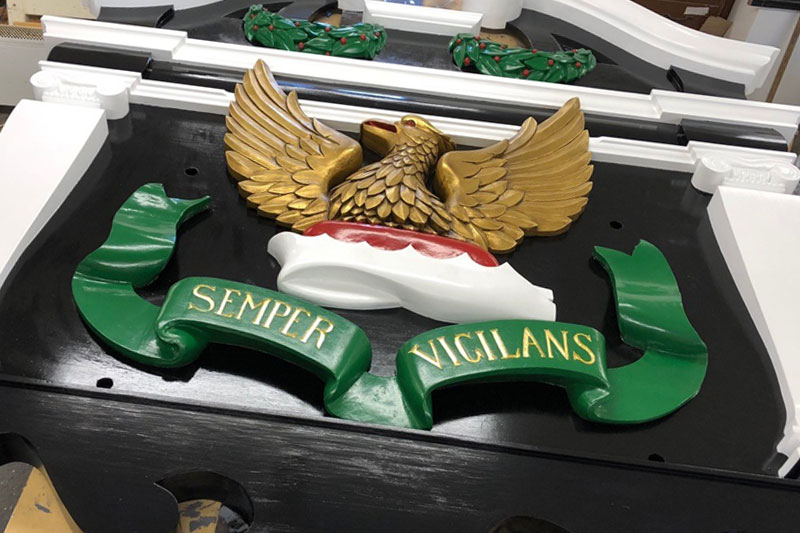 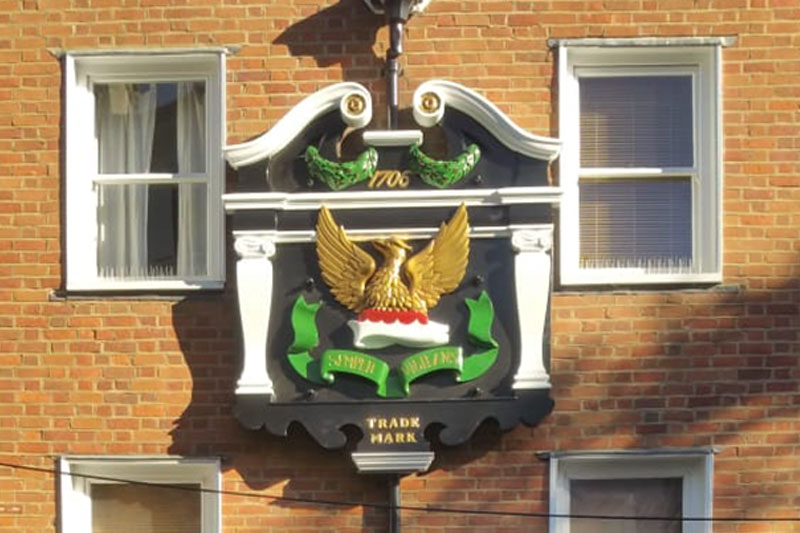 The recent restoration of the crest has won a Royal Tunbridge Wells Civic Society award. This was presented by Mayor Councillor Len Horwood at the award ceremony held at the Town Hall on Thursday 11th October.

Sarah Bird (Facilities Manager – The Pantiles) received the award on behalf of Targetfollow, along with Joseph McCarthy. 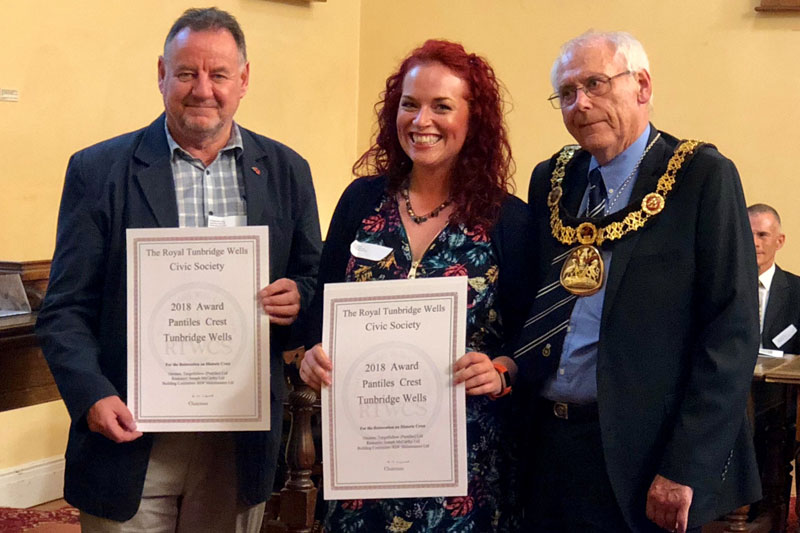 Be sure to come to The Pantiles and enjoy this wonderful historical landmark that has been restored and reinstated to its former glory!